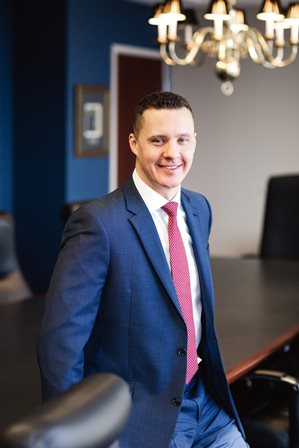 Mr. Ryder is a graduate of the State of University of New York at Potsdam and Albany Law School of Union University, where he was inducted into the Order of the Barristers. He is listed in Upstate New York Super Lawyers®, a publication with membership limited to the top 5% of lawyers in each state and, having secured 2 verdicts and 8 settlements in excess of $1,000,000.00, Mr. Ryder is a member of the Million Dollar Advocates Forum®.

Mr. Ryder is a past president of the Board of Directors of the Onondaga County Bar Association.  In 2018, Mr. Ryder was appointed by the Presiding Justice of the New York State Supreme Court, Appellate Division, Fourth Department to serve as a member of the Grievance Committee of the Fifth Judicial District.  The Grievance Committee for the Fifth Judicial District is responsible for the investigation, review and prosecution of complaints of attorney misconduct in Onondaga, Oneida, Oswego, Herkimer, Jefferson and Lewis Counties.

Mr. Ryder has presented 4 continuing legal education seminars to members of the bar on tort-related topics, and has guest lectured SUNY Upstate physical therapy students on the topic of charting and risk management.  In 2022, he was re-elected to serve a three-year, unpaid term on the West Genesee Central School District Board of Education.

Prior to joining Bottar Law, PLLC, Mr. Ryder began his career as a litigation associate with the Syracuse office of Hiscock & Barclay, PLLC, and as a senior litigation associate with the Syracuse office of Bond, Schoeneck & King, PLLC. As an attorney with two of Central New York’s largest law firms, Mr. Ryder represented both plaintiffs and defendants in a wide array of complex legal matters, including business litigation and personal injury claims.

Mr. Ryder was born and raised in Skaneateles, New York, and presently resides in Camillus, New York, with his family.

Aaron J. Ryder In The News
Contact us
Practice Areas